Back in January I received the first ever Sourced Box. I have just received the fifth one and yet again I am overcome with joy at the range of snacks. Here’s a peek at what tasty treats were included in the May box. 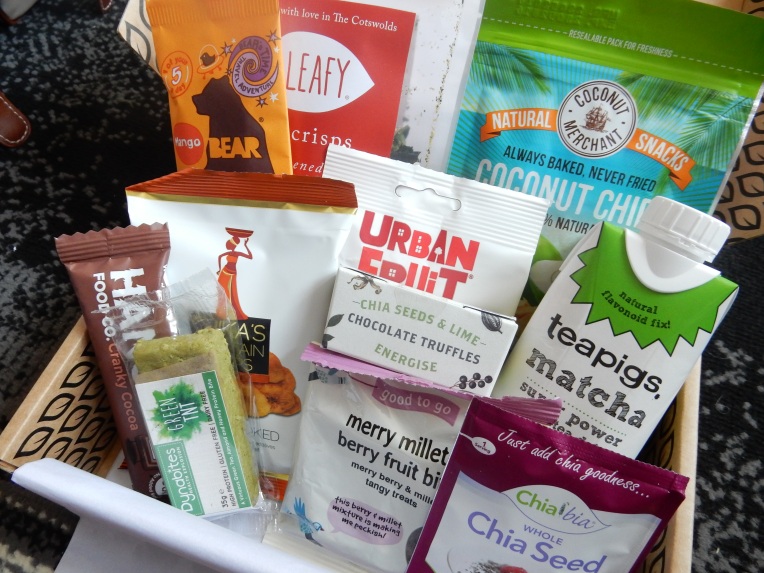 Usually I prefer the sweet snacks over the savoury but I’m finding myself grow increasingly fonder of the crisp alternatives that seem to be finding their way into the boxes every month. I always have something ‘snacky’ as part of my lunch so these are always great to have on hand. This month we’ve got vine ripened tomato & oregano flavoured kale crisps and plantain crisps (plantain is a less sweet version of a banana). There’s also these conconut chips by ‘Coconut Merchant.’ The past few boxes have included flavoured coconut chips, but this time around their just plain. They’re going to make a great topping for my porridge, weetabix or yogurt.

Since the warmer months are slowly approaching, Sourced Box are including more fruity snacks. Nobody wants to find a mess of melted chocolate, do they? Here we’ve got a packet of strawberry fruit snacks by ‘Urban Fruit’ (I had a feel of them through the packet and they feel like jelly sweets!), merry millet & berry fruit bites from ‘Holland & Barrett‘ and an extra surprise. Sourced Box confirmed that they snuck an extra snack into this months box and it was this packet of mango flavoured fruit yo yos. I’ve tried the strawberry flavour before and they were pretty good so I’m looking forward to trying this flavour. Both the strawberry fruit snacks and the yoyos are 1 of your 5-a-day too!

We may be approaching the risk of melted chocolate, but that doesn’t stop this months box from satisfying those choc cravings. In the need of some serious indulging? These chia & lime chocolate truffles sound like they’ll work a treat. There is also this new raw bar by ‘Hangry Food co.’ You should know by now that I am a sucker for raw snack bars and this is no exception. This snack will definitely be one of the first ones devoured! 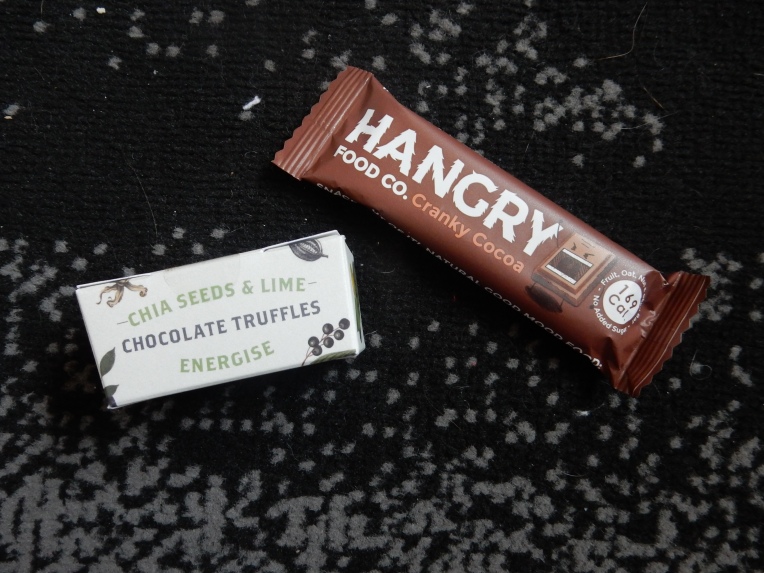 The word ‘superfood’ has received a lot of hype in recent years and Sourced Box is certainly on the bandwagon. We’ve got a green tea theme here with this ‘Teapigs’ apple flavoured matcha green tea drink. A few boxes back I received a sample of the matcha powder itself and I loved that so I’m curious as to what this will taste like. We also have a questionably coloured protein bar by ‘Dynabites‘ which is a mix of green tea, almonds and honey. As usual, there is an added extra sample and this month we have a little sachet of chia seeds. This is great as I’ve wanted to try chia seeds for a while but have never wanted to splash the cash on them since I have no idea how to eat them. Now’s the perfect time for me to google the best way to eat these little things!